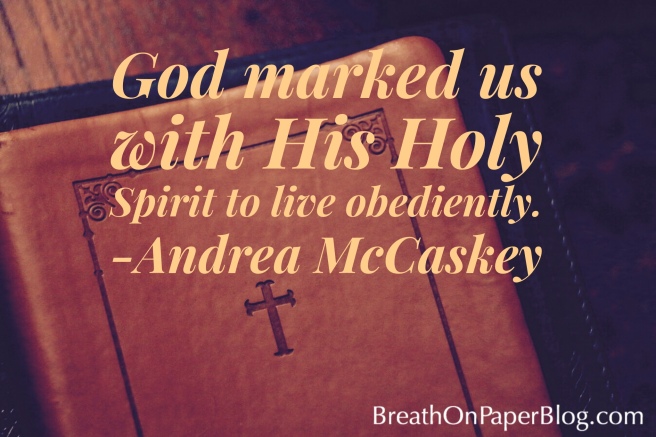 And you also were included in Christ when you heard the message of truth, the gospel of your salvation. When you believed, you were marked in him with a seal, the promised Holy Spirit, who is a deposit guaranteeing our inheritance until the redemption of those who are God’s possession—to the praise of his glory.   Ephesians 1:13-14

Tattoos. They seem to inspire either love or disdain. There doesn’t seem to be any in between. People sport them on most of their visible body parts. But, tattoos on my face, neck, that sleeve thing? That’s not for me.

However, I have been thinking recently about getting something small. And placing it in a fairly discreet location. You know, one where it won’t matter that my aging skin morphs it into something unrecognizable.

It would mark a new direction, a new chapter, a beginning again.

Author Ann Voskamp draws a cross on the inside of her wrists each morning. She says it’s to remind her to live cruciform.

Cruciform — formed and shaped like a cross, arms out-stretched like the beam of the cross, broken and given out into a broken-hearted world.

It’s about dying to self so that others may live.Those crosses remind her of the sacrifice made for her salvation. And how she can be the hands and feet for those He places in her path.

A broken-hearted world. How appropriate. As we witness the carnage and destruction of wars and rumors of wars and storms and mass murders and hatred, it’s becoming easier for me to detach.

So my heart stays safe. So my words – or my silence – won’t offend. So my fear of being pushed out of my comfort zone isn’t tested. 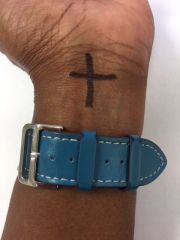 He marked me with the seal of the Holy Spirit.And because of that, I can confidently keep my peace or voice my concern. However the Spirit leads me.

A friend helped me understand this better recently. Yes, I may be led to protest the injustices in our world. Or, I may be called to fast and pray and be silent in the face of overwhelming pressure to voice my opinions.

He created us to be a peculiar people.The walls of Jericho came down after the people of Israel walked around the city silently for six days and then shouted on the seventh.  No bows and arrows of fire. No rocks or boulders. Just walking and then shouting. Who does that? Peculiar. Obedient. People.

But ye are a chosen generation, a royal priesthood, an holy nation, a peculiar people (God’s special possession); that ye should shew forth the praises of him who hath called you out of darkness into his marvellous light: 1 Peter 2:9 KJV

Now, as I think about my tastefully discrete tattoo, it might represent a different reason. Not so much a new beginning, but maybe a new understanding of who God marked me to be. And why. 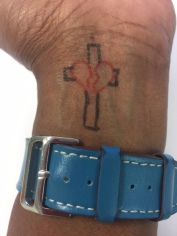 This world will have trouble. There will be heartbreak that takes our breath away. And because of the cross, we can and we will believe that God marked us with His Holy Spirit to live obediently. Whatever. Wherever. Whenever.

Marked and peculiar? I’m, good with that.

You are what God says that you are!  You are enough!

Make Breath on Papera part of your daily devotion as we begin this new series on what God says about us , I AM – what God says that I am.  (unsubscribe at anytime)

Hey there friend! Andrea McCaskeyhere. I believe everything happens for a reason, life is meant to be lived in relationship with others and there is beauty to be found everywhere if we look. I am a friend of God, wife of Jamal and mother of Brandon and Madison.