You have made known to me the paths of life;
You will fill me with joy in Your presence.
Acts 2:28 NIV

It was really odd. If I had not witnessed it with someone else, I may have missed the truth of it and my story would not have been believed.
My college-age daughter had burst into the house in her “drive-through” mode, careening into the kitchen first to see what might catch her eye in the fridge, then bounding downstairs to the pantry for more staple items to return to her dorm room.
“Could you scratch my back?”
She surprised me. Always glad for any moments with her, I was happy to head into the living room where we often used to enjoy this ritual. Sometimes she would even ask me to feather her hair. How I missed these precious moments as her life had become larger without me. I savored it now, even in drive-through mode. 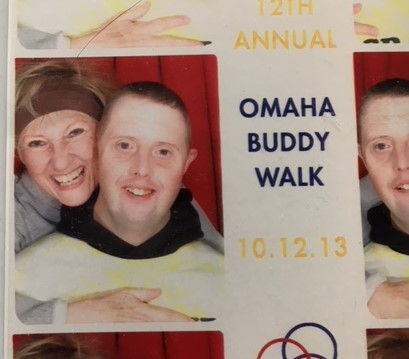 My son Ben had heard the commotion and came to see. He entered from the adjacent open dining room and, bending from his waist, peered sideways, as if to affirm the apparition of this surprise visit.
And then … God showed up!!
It happened ever so quickly. Seconds, I imagine. Like a series of pages drawn in stages and flipped with your thumb, in slow motion Ben began to change. It began at the top, with his entire head expanding. His hairline altered and included a part. Eyebrows were raised and almond eyes turned to ovals, now deeper set, with a noticeable bridge between them. Ears moved higher and were larger. His face took on contours, with his nose becoming more distinct, his mouth and lips more structured, still with his winsome smile. As his neck elongated, his shoulders showed a definite musculature.
Then, with a ripple, it all was gone.
I can still see it!
Every feature of his Down Syndrome condition, from his shoulders up, had been altered!
“THAT was weird!” I heard her say.
Exactly what I thought! I told myself, letting out the breath I had been holding. I was grateful for her confirmation of having truly witnessed this. To say we were absolutely stunned to unbelievability would be vastly understated!
Ben joined us on the sofa, and I remember touching his face, seeing and feeling again all the sweet features of his child-ness, wondering if perhaps God had allowed a mere glimpse of him in heaven.

Surely You have granted him eternal blessings
and made him glad with the joy
of Your presence.
Psalm 21:6 NIV

Leave a comment below and let us know what you think.

Make  Breath on Paper a part of your daily devotion. (unsubscribe at anytime)

After Ben was born with Down Syndrome, Lori Rinehart discovered her mother’s intuition and graceful humor to nurture a community of other parents and caregivers.  Serving 5 years as Early Intervention Support Coordinator for PTI of Nebraska, she trained families to not only survive but thrive in their ‘new normal’.  She knows personally the power of a good, good Father God.  Her mission is to guide others to build hope for their families.

One thought on “I Will Remember You! Will You Remember Me?”