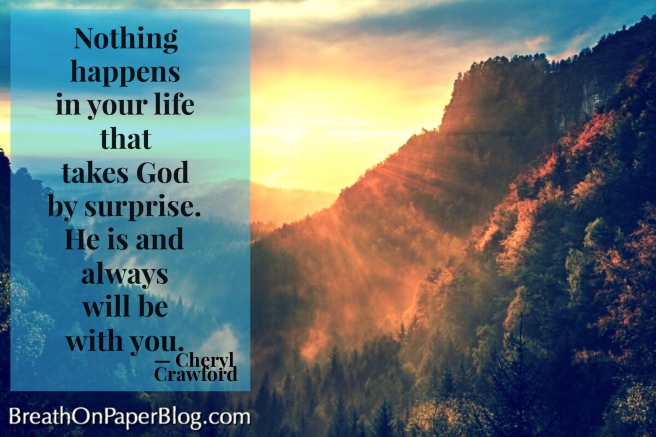 “In this you greatly rejoice, though now for a little while, if need be, you have been grieved by various trials, that the genuineness of your faith, being much more precious than gold that perishes, though it is tested by fire, may be found to praise, honor, and glory at the revelation of Jesus Christ.“  1 Peter 1:6-7

What do you do when you get a report from the doctor and he says you are not going to live?When your once happily–ever–after marriage has ended in a bitter divorce? When you lose your job and you‘re wondering how you are going to make it with no income coming in? How do you handle the trials that come crashing down, turning everything in your world upside down?

First, you have to remind yourself that nothing happens in your life that takes God by surprise. He is and always will be with you. He knows the end from the beginning of every trial you will ever face and He will be there to walk you through it.

Even when I walk through the darkest valley, I will not be afraid, for you are close beside me.  Psalm 23:4 NLT

Jerry and his wife were about to face a trial as they sat in the doctor’s office waiting to hear his test results. The report revealed an aggressive brain tumor. The doctor spoke of radiation, chemotherapy and gamma knife surgery. The medical prognosis for Jerry’s type of brain tumor was certain death in six months.

Now, there was no denying the diagnosis of the doctor’s report, but through Jerry’s genuine faith in Jesus Christ, he could defy the verdict. He knew, the final word on hope didn’t come from the earth, but from heaven.

We have to choose hope. Too often, we choose lies instead.

God gave Jerry a word. A word to believe that according to his doctor’s report seemed impossible. God’s Word says that our healing was paid for by the Blood of Jesus!

Jerry told his doctor God had healed him.

Six months went by and Jerry was still alive. A year went by and he was alive. Two years go by and Jerry asked his doctor how many of his patients were living with this type of brain tumor and his doctor said there are none, they don’t live. He went on to tell his doctor once again that God had healed him.

For nine years Jerry gave his testimony to everyone he could, and it was the greatest testimony of faith and hope I have ever heard. His faith was more precious than gold that perishes, and though it was tested through the fire, it was found to praise, honor and glory at the revelation of Jesus.

When you have a word from God, you stand on His Word no matter how impossible it is for you to imagine or what people may say, because “with God all things are possible.”

Leave a comment below and let us know what you think.

Make  Breath on Paper a part of your daily devotion. (unsubscribe at anytime)

Cheryl Crawford is a daughter of the Most High King, saved by grace. Her degree and field of work are in accounting, but would trade it all to farm if she could. She enjoys reading, writing, gardening, SEC football, and playing cards with friends. Cheryl is a natural organizer with a heart that loves to serve. You can read more about Cheryl on her BoPbio.

5 thoughts on “All Things Are Possible”