Moving right along, this week we are looking at the beautiful AND godly Abigail.

The last sermon I heard on Abigail was nearly a year ago.  Funny that I remember that.  To a group of nearly a thousand women, Lysa TerKeurst, told Abigail’s story, pointing out that she was married to the dirty, rotten scoundrel, Nabal. A wealthy but shrewd business man who drank in excess.

The third character in our story this week is the soon to be king, David. When we find Abigail’s story in 1 Samuel 25, we see David hiding from King Saul in caves with a band of six hundred rebels.  If you remember, Saul was jealous of the young and handsome David and had been scheming to kill him for several years now.

David and his men had protected Nabal’s herds from rustlers and poachers when ever they grazed near the caves. About the time sheering season was in full swing, David sent a few of his men to ask Nabal for food so they could celebrate the upcoming feast too.  But the dirty rotten Nabal blows them off like they were rogue strangers, even asking, “Who is this David you speak of?”

I can imagine these guys scurrying back to tell their leader exactly what he had said!  And sure enough their report didn’t sit well with the one who had been protecting Nabal’s herds all this time.

It’s almost like we can read between the lines and hear David saying…“Who is David?” Well, let me just show you who I am Nabal!  We will come down out of these hills and kill you and all your men!

And David and four hundred of his men head out to take care of this situation. 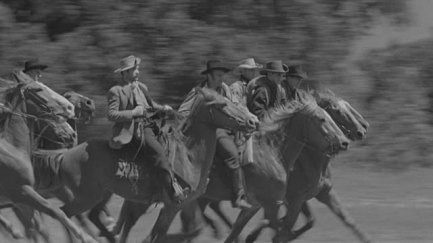 If this were a black and white ‘B western,’ now is when the music would begin getting louder, leading up to a great climax as David and his men head out of the hills down to the ranch!

BUT the scene quickly cuts to Abigail, in her home.

Abigail gets word that David and his men were on their way to kill her husband because of the way he repaid them. Being a smart woman who hears from God, she “quickly” loads up bread, figs, raisins, wine, and roasted sheep, hops on her donkey, and heads out to intersect the next king of Israel to beg forgiveness on her husband’s behalf.

David and his men are racing towards the ranch and Abigail is racing out to cut them off.

The music comes to a crescendo!

I bet this is where they would cut to commercial.

Abigail sees David and quickly jumps off her donkey, bows face to the ground, and petitions David to not kill her husband but to judge her instead. She reminds David that God said he would rule and reign and he didn’t need the blood of Nabal on his hands.

couldn’t help but notice Abigail’s beauty and humility. After all, she had brought food as an apology offering, exactly what her husband had denied him to begin with.  (Maybe its true, the way to a man’s heart is through his stomach.)

David comes to his senses, accepts Abigail’s apology and the food and turns back to the caves.

Abigail returns home only to find her husband in a drunken state caught up in the celebration of the sheering season festivities. Being a wise woman, she quickly realizes that she should not even go there with him while he is in this state and chooses to hold her secret till a better time. (Isn’t is interesting that sometimes wisdom is knowing when to say nothing?)

Early the next morning (wise women rise early) Abigail greets her hungover husband and confesses what she had done the day before to save his life.

At her words, Nabal’s heart failed him and he became like a stone. About ten days later, the Lord struck Nabal and he died.

Word certainly traveled fast and David sends a few of his men to ask the beautiful Abigail to marry him. Sure enough, she gathers up five of her maidens and again quickly hops on her donkey and…

rides off into the sunset to become David’s queen.

Abigail wisely chose not to nag her husband, condemning him for rejecting David’s men. Instead, she interceded on his behalf.  She honored him as her husband despite his actions.  And God blessed her.

She wisely chose to wait for the appropriate time to tell Nabal what she had done to save his life.  Her heart was right and she waited for the right time to have that hard conversation.

Abigail gave it to God and He protected her.

Whoever goes to the Lord for safety, whoever remains under the protection of the Almighty,  can say to him, “You are my defender and protector. You are my God; in you I trust.”   He will keep you safe from all hidden dangers and from all deadly diseases.  He will cover you with his wings; you will be safe in his care; his faithfulness will protect and defend you. Psalm 91:1-4

Help me oh Lord to remember Abigail and her wisdom as I go through my week. Help me to learn from her experiences. Give me wisdom.

Make us a part of your Daily Devotion and have Breath on Paper emailed to you.  (unsubscribe at anytime)

Cindy Willingham is a landscape designer, small group leader, avid encourager, and sinner saved by grace who is eight years new to Birmingham, Alabama.  Her sweet husband of 37 years, two married children and four grand-kiddos fill her life with unbelievable fun and sweet snuggles. She thinks God is awesome and that the best adventure starts with saying yes to that still, small voice. ~ To read Cindy’s BoP Bio click here.