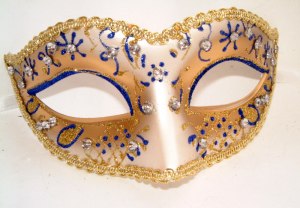 A nameless little girl, bound by a demon, who gets set free. It could seem insignificant in the grand scheme of things, when you consider all the other miracles and deeds that Paul did in his ministry. However, God doesn’t give us details like this for nothing. She may have been nameless, but this girl was anything but insignificant. After all, it’s because she was set free from her demon, no longer able to tell fortunes, that caused a riot, Paul and Silas being beaten and then thrown in jail.

I know the story of them sitting in prison singing hymns at the midnight hour just before the Lord shakes the earth on their behalf. I grew up knowing that story and can even recall the flannel graphs that were used in Sunday school to teach it. But the part that I missed, that I didn’t recall, was the reason they landed in prison in the first place. I had always understood it to be that it was because they were teaching the Gospel and of course there was persecution and rejection of the message, and that’s what caused the uproar and led to their imprisonment.   I think most people who recall this story, would assume the same thing. Since that wasn’t the case, but in fact it was because of this slave girl being released from the future telling demon, it begs the question, why an uproar? I get that her masters were peeved because they just lost their little money-maker, but it says the whole city was in an uproar over this.

It turns out this girl was possessed with the spirit of Python, which is associated with Apollo, the god behind the oracle at the Greek city, Delphi, a fortune teller. Apollo happens to be the god that the people of Philippi worshiped. So in her following Paul and Silas around, shouting “these men are servants to the most high God, and they have come to tell you the way of salvation,” in this Greek/Roman city, to which god do you think the people assume she’s referencing? Especially if they initially know nothing about this Jesus Christ that Paul has come to tell them about?   Ding, ding, ding! They’re going to assume she’s referencing their most high god, Apollo. You can see the predicament this is for Paul and why he’s so annoyed when he casts out her demon. She’s speaking truth, but the demon within knows that her truth can be tied to the god that this city worships, which corrupts and sabotages Paul’s mission and message.

So when Paul casts out this demon, silencing the manipulating words, it undoubtedly rocks the city to see such power be demonstrated from a God that was not their own. No wonder they’re in a tizzy! What I think we fail to realize is that this girl did have a power, through demon possession of course, but a power nonetheless. These people didn’t recognize or even know what demon possession was. How could they understand? They lived in a world where “powers” existed and some have them and could do great things. They believed the powers were given to them by their gods….and they were. The thing is, they didn’t understand that the god they served that supplied the powers, was Satan. He wears the name of many gods, though many don’t make this connection. He’s known as Apollo, Zeus, Thor, Buddha, Allah, etc. Because there is only one God, and any other is just a mask of Satan to cause confusion and distraction. The enemy, knows this too, and was using Paul and Silas’ message to point back to himself and the god that represented him, to this city.

This slave girl was a pawn for the enemy, forced to do his bidding. But, Romans 8:28 tells us, “God works ALL things together for the good of those who love God and are called according to His purpose for them.” And He worked this for His purpose for the good of Paul, and ultimately this little girl. Because her getting set free represents all the others unknowingly bound by the enemy, masked as the god they serve, being set free as well upon hearing and receiving the truth. Satan was exposed.

God can expose the enemy behind the mask in areas of our lives. Areas that we may not even realize that serve the enemy because they don’t wear such an obvious name. And when we allow Him to expose those demons for what they are, the results will always be earth shaking.

Has there ever been a time in your life when you wore a mask?  Or a time when you realized the enemy was masking something in your life?  What did you learn?   Come share with us on our blog. We’d love to hear from you!   ~ Heather

One thought on “Exposed”